Transactional leadership is a style of leadership that uses reward and punishment to motivate subordinates.

Transactional leadership gets its name because it relies on an exchange or transaction. Subordinates who perform tasks as specified receive a reward in exchange for their efforts, while those that underperform are punished or reprimanded.

Transactional leadership was first described by Max Weber (he called it rational-legal leadership), a German sociologist born in 1864, who is most widely known as the creator of bureaucratic theory.

Transactional leadership is also referred to as managerial leadership because it focuses highly on subordinate supervision, organization, and performance.

There are several important characteristics to note about transactional leadership. Let’s examine each one in turn. 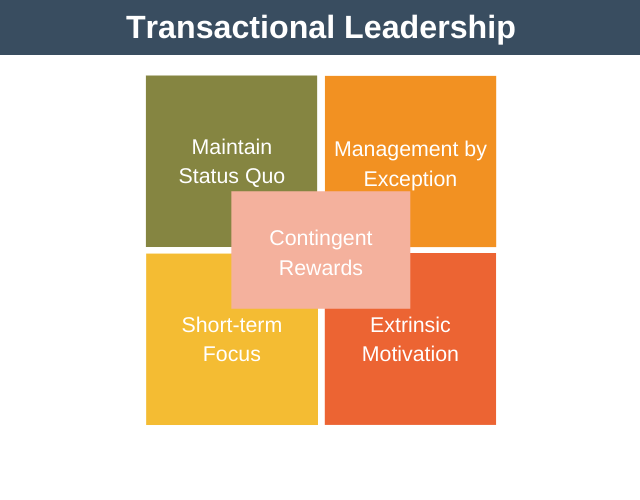 Transactional leaders are very focused on getting results and getting them quickly. To do this, they appeal to their subordinate’s self-interest by using rewards and punishments.

Transactional leaders work within the existing constraints of the organization to get things done. They work within the current chain of command, which should be clear and well-defined. They do not tend to think outside of the box.

As such, they are good at ensuring that existing processes are executed efficiently and that simple and routine issues are dealt with quickly. They are not so good when it comes to solving complex problems that require inventiveness or determining entirely new ways of doing things outside of the existing status quo.

Transactional leaders manage by exception, meaning they only get involved when their subordinate’s work deviates from what has been agreed upon.

Each transactional leader can manage by exception either actively or passively. Actively means they will closely monitor the work of subordinates as it is being done and take immediate corrective action as soon as something appears wrong. Passive transactional leaders don’t monitor work as it happens but instead take corrective action only once issues have been brought to their attention.

Because transactional leaders are practical in the sense that they focus on efficiency within the existing status quo – gettings things we already know how to do done faster, they are best suited to working towards shorter-term goals.

Getting more of the same done, only quicker, suits them perfectly. So does managing simple tasks over and over again, such as supervising a call-center. Large, complex change projects that require and organization to change its entire shape and orientation are not suited to be managed by transactional leaders.

The primary focus of transactional leaders is on the delivery of results. They are not concerned particularly with the welfare or well-being of their subordinates.

In today’s world, transactional leaders are out of favor. Most aspiring leaders yearn to be the type of leader to change the paradigm of how things are done and develop new visions of the future.

Rules, procedures, and standards are out of fashion.

Yet the world needs transactional leaders. They are especially useful in crisis and turnaround situations when short-term goals need to be achieved quickly and decisively. They also work well in organizations where structure and systems are important, such as high-volume manufacturing.

Transactional leadership is common in sports teams and can be a powerful motivator for players from game to game. Winning the game is the reward, and losing may mean losing your place in the team for the next game. This type of leadership can be hugely motivating with subordinates willing to risk serious injury to achieve the results being asked for by their leader or coach.

Transactional leaders can also be seen to have many positive traits such as straightforwardness, practicality, and transparency, as you understand exactly what they expect you to achieve.

There are a number of advantages and disadvantages associated with transactional leadership.

Transactional leaders, also known as managerial leaders, motivate their subordinates through a system of reward and punishment. If a subordinate does what has been asked of them they will be rewarded. Conversely, if a subordinate fails to live up to the expectations of the leader, a punishment will follow.

Transactional leaders do no believe that subordinates are self-motivated. They believe they can only be motivated through reward and punishment, and that they must be monitored to produce satisfactory work.